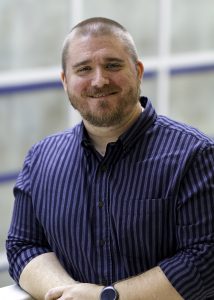 Phil began playing the trumpet at age 10 and joined his middle school band in 6th grade. Throughout middle school and high school, he excelled in music and decided to choose music education as a career. As a collegian Phil played jazz, concert and orchestral ensembles, as well as pit orchestras for Cabaret, L’il Abner, Kiss Me Kate, Joseph and the Amazing Technicolor Dreamcoat and Bye, Bye Birdie. He was a member of The Brandon Clay Quartet, a jazz combo based in Quincy, Illinois and he did several performances with the Quincy Symphony Orchestra, all while studying to obtain his Bachelor of Music Education degree from Culver-Stockton College. Phil married his college sweetheart in 2008, and, after earning a Master of Music degree in music theory from Missouri State University while serving as a graduate teaching assistant, they moved to Utah. While there, he taught band, choir and theater at North Sevier High School and North Sevier Middle School. He was a vocal and stage director for the musical Footloose! and his concert bands earned multiple district and state awards. After moving back to the Midwest, he taught 6-12 grade band and was the technical theater manager in the University City School District from 2012 until 2014.