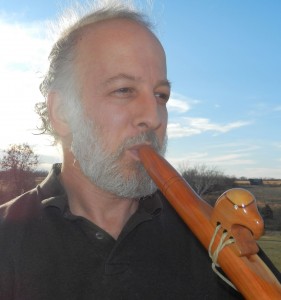 Andrew Markus Bishko, MM, grew up studying classical flute and piano, branching out into jazz, folk and Irish music. He completed his undergraduate degree in Humanities at Northwestern University in 1982, after which he spent several years in Italy, where he returned to music as an improvising street musician. From 1985 to 1990, Andrew toured with the reggae band “Satta” in the United States, Europe, Asia and the South Pacific. Andrew completed his Masters of Music degree at New England Conservatory (1995). Andrew then focused on Klezmer, the instrumental Jewish music tradition of Eastern Europe.  He established the Alaska Klezmer Band, and then the Alaska Klezmer Duo, recorded 3 albums and taught internationally. He began teaching private music lessons in 1990 and college classes at the University of Alaska in 1995. Andrew moved to Missouri in 2005 to join a spiritual community, and began teaching at OTC. He has since married, and he and his wife have home-birthed three children and are building their own straw bale home. Andrew teaches Music of the World, Western Music Appreciation and Songwriting classes at OTC.  He teaches and performs on several instruments, including flute, saxophone, piano, accordion, harmonica, Native American flute, and Irish flute and whistle. He is the Music Minister of Christs Community Church, where all of the music is original songs by the congregation. In 2012, Mel Bay published his book, “First Lessons in Native American Flute: How to Sit on a Rock” illustrated by OTC colleague Tom McCune.