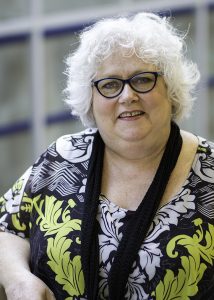 Office: By Appointment Only

Alberta L. Smith is a highly respected vocal performer and choir director whose experience ranges from performance at Tan-tar-a, Carnegie hall and in the great cathedrals of Italy. Along with her consummate skills as a performer, Alberta has served as a professional choral director for the past thirty-three years, in settings as diverse as a large urban school in St. Louis, to a rural setting in central Missouri, to a graduate assistant position with Dr. Guy B. Webb of Missouri State University, to, most recently, a long tenure with the Springfield R-12 School District where she is the 2012/2013 Teacher of the Year.  Alberta holds degrees from Southwest Baptist University (B.M. in Education) and Missouri State University (M.A. in Music Education).  She has served as District Director for the District Honor Choir of South Central Missouri, working extensively with both middle school and high school vocal music programs.  Alberta is an active member of MMEA, NAfME, ACDA, MCDA and NEA. She is currently the South Central District Representative for the Missouri Choral Directors Association. In addition to her professional responsibilities, Alberta remains active as a patron and a performer/instructor with the Springfield Regional Opera, Springfield Little Theater, and the Upper Chamber Singers directed by Connie Bilyeu.  Currently, Alberta is the choral music director of eight choirs at Central High School in Springfield, Missouri. Her Concert Choir, Chamber Choir, Women’s Choir, Men’s Choir and her musical productions have experienced widespread recognition.  Alberta’s commitment to producing the highest quality of musical performances, as well as her dedication to the lives and futures of her students is her calling.