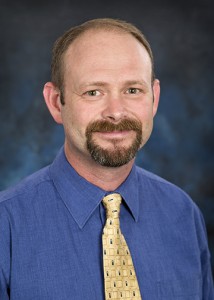 Rob Flatness grew up on a small family farm. At age 11, he began working for his family’s construction business. He continued working full and part-time for the business until 1997. During high school and college he also worked at GENEX with cattle artificial insemination for five years. Directly out of college he worked in animal health sales and corporate hog farming. He has also worked in construction supply and equipment sales for five years.

Beginning in 1997, Flatness worked as a high school agriculture instructor and Future Farmers of America advisor for seven years. In 2009, he joined OTC’s agriculture department and was named department chair of construction trades in 2015. The programs that are included in this area are agriculture, construction, electrical, and heating/ refrigeration/ and air conditioning.

Flatness received his master’s degree in CTE administration leadership from the University of Central Missouri. He received his bachelor of science in May 1995 from Missouri State University. In 2015, he was the recipient of the Missouri Community College Association’s Mel Aytes Faculty Innovation Award for creating a student-centered learning environment within his program.  Currently, he teaches Woody Ornamental Identification, Landscape Construction, and the Turf Management capstone class.