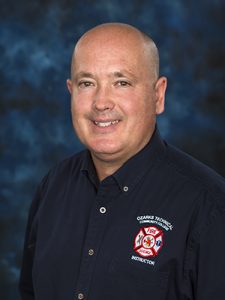 After graduating from Buffalo High School, Randy Villines enlisted in the U. S. Air Force out of a desire to serve his country. When his enlistment ended, he began seeking out a rewarding, new career. He was living in El Paso, Texas and happened to see a news story about the El Paso Fire Department Recruit Academy. He had never really thought about the fire service before then, despite his family’s home burning to the ground when he was a boy. But he applied and was accepted into the El Paso Fire Department Training Academy. Six months later, he was an official firefighter.  There, his District Chief he was assigned happened to be from Everton, Missouri. The Chief suggested that while the fire service was a great career anywhere, Missouri was a great place to raise a family. Villines took note, and while vacationing with his family in his hometown of Buffalo, the Springfield Fire Department happened to have its written and physical agility tests. He applied, passed his exams on vacation and a year later was offered a job. He moved back to the Ozarks in 1993.

In the years to come at Springfield Fire, he was promoted up through the ranks to his final position of Assistant Fire Chief of the Prevention Division. While serving 24 years with Springfield Fire, he completed his associate’s degree in fire science technology from OTC in 2006 and became a member of the Fire Science Technology Program Advisory Board to help positively influence the program. He began teaching at OTC as an adjunct instructor for the Fire Science Program, while continuing his education, receiving his Bachelor of Arts degree with a minor in Fire Administration and a certificate of graduation in Fire Prevention Technology in 2009.

Fate again intervened in his career when by coincidence, former Fire Science Technology Program Director Dan Whisler, one of Villines’ former Fire Chiefs at Springfield, announced that he would be retiring from his position at OTC in the summer of 2017. At that time, Villines had been toying with the thought of retiring from the Springfield Fire Department and returning to Texas. Villines was impressed by the work done by Whisler, and though encouraged to apply, he thought Whisler’s shoes too big to fill. But with Whisler’s encouragement, he applied and was offered the job as Program Director, Department Chair and adjunct instructor for the Fire Science Technology Program. He began work in August 2017.

Currently, Villines teaches two online Fire Science classes: Building Construction and Principles of Emergency Services. His favorite classes to teach are Legal Considerations for Fire and Emergency Services and Firefighter Safety and Survival. He loves teaching those classes because the information he shares in one class could help save a student’s career and the other class could help save a student’s life.