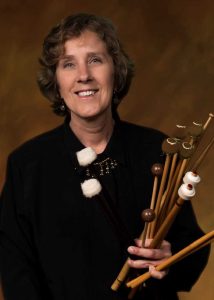 Office: By Appointment Only

Percussionist Susanna Reichling performs with jazz, classical, and contemporary music groups throughout the Kansas City and Springfield/Branson regions. Ms. Reichling earned her Master of Music degree from the UMKC Conservatory of Music in Kansas City, studying percussion and musicology. Her research interests include contemporary American music, Revolutionary and Civil War drumming, and a broad range of world music styles including West African drumming, Cetral American marimba, and the Balinese gamelan.  Her career as an orchestral percussionist began as a college student in the early 1980s, playing in the Cedar Rapids (Iowa) Symphony under conductor Christian Tiemeyer.  She has since performed with a variety of professional ensembles, including: the Kansas City Symphony , the Kansas City Camerata, the Kansas City Ballet Orchestra, newEar Contemporary Music Ensemble, Springfield Regional Opera, and the Springfield Symphony.  She has performed with nationally-touring productions of Broadway’s Oliver and the The Sound of Music, as well as numerous stage shows with show business legends such as Chip Davis (with Mannheim Steamroller), Johnny Mathis, Ray Charles, and Melissa Manchester.  As an Arts Educator with Kansas City Young Audiences, Ms. Reichling has presented over 350 workshops and concerts in public schools across Missouri and Kansas, and many of her private percussion students have gone on to develop professional music careers of their own.